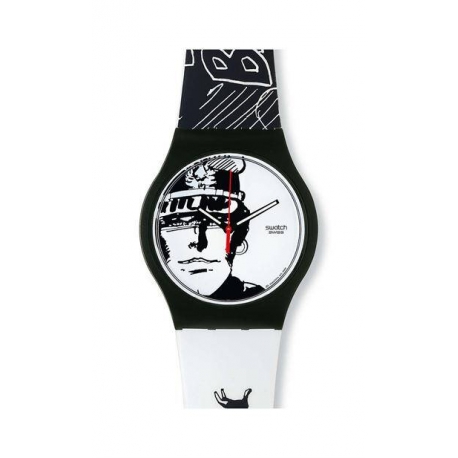 By buying this product you can collect up to 24 loyalty points. Your cart will total 24 points that can be converted into a voucher of €4.80.

Italian comics author Hugo Pratt is best known for his beloved comics protagonist, Corto Maltese, whose action-packed adventures and psychological nuance take center stage in Pratt’s popular series of comics stories. Corto Maltese first appeared in 1967 in A Ballad of the Salty Sea (Una ballata del mare salata), and went on to appear in a series of adventures inspired by Melville, Stevenson, Conrad, Jack London and others. Pratt was also known for his later series, Scorpions of the Desert, and for adapting Stevenson’s Treasure Island and other adventure stories for children.

Created to mark the 40th anniversary of our hero’s first adventure, two Corto Maltese watches bring the high-seas swagger of Pratt’s popular comic series to life. Corto (SUJZ106) showcases the jaunty-capped protagonist, realized in high 1970s colors and graphics that evoke the adventures of pirates and smugglers set in the period of the 1st World War.

3 other products in the same category: