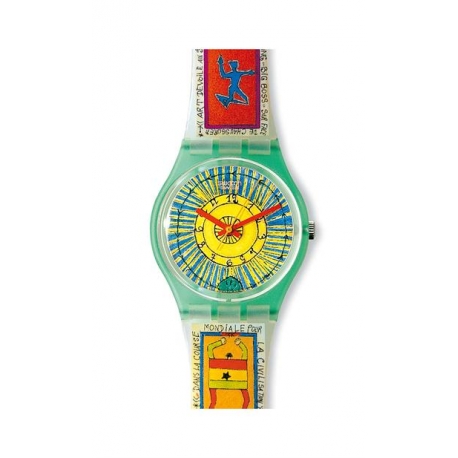 By buying this product you can collect up to 7 loyalty points. Your cart will total 7 points that can be converted into a voucher of €1.40.

Inventor of his personal alphabet, founder of his own religion and writer, Frédéric Bruly Bouabré is a hunter of signs: signs of nature on human beings, traces of man on nature. From one small drawing to another with a direct and essential style, he reinterprets the world and maps out a disconnected vision of that world. Bouabré was born in 1923 and the big challenge of his life was not to die in anonymity. He took the way of art to reach this goal and he succeeded in becoming one of the most singular figures in the history of African contemporary art.

The origin of all of Frédéric Bruly Bouabré’s work stems from a revelatory experience: on March 11, 1948, “the heavens opened up before my eyes and seven colorful suns described a circle of beauty around their Mother-Sun, I became Cheik Nadro: ‘He who does not forget.’” From then on he tackled every field of knowledge and collected his research in manuscripts about arts and traditions, poetry, tales, religion, esthetics, and philosophy, revealing himself to be an astonishing thinker, poet, encyclopedist, creator. Searching for a way to preserve and transmit the knowledge of the Bété people, as well as the knowledge of the entire world, he invented an alphabet of 448 monosyllabic pictograms to represent phonetic syllables. This endeavor earned Bouabré the legendary reputation of being another Champollion, in reference to the great scholar and linguist Jean-Paul Champollion (1790-1832), who discovered the key to understanding Egyptian hieroglyphs. Bouabré’s alphabet, which can transcribe all human sounds, reflects the essence of his thought: to achieve universality and to unite mankind.

In the 1970s, he started to transfer his thoughts to hundreds of small drawings in postcard format, using a ballpoint pen and colour crayons. These drawings, gathered under the title of Connaissance du Monde (World Knowledge), form an encyclopedia of universal knowledge and experience. Other projects, such as Readings from Signs Observed in Oranges (1988), serve as visionary records of divination. For Bouabré, his drawings are representation of everything that is revealed or concealed—signs, divine thoughts, dreams, myths, the sciences, traditions—and he views his role as an artist as a redemptive calling. He has stated: “Now that we are recognized as artists, our duty is to organize into a society, and in such a way to create a framework for discussion and exchange among those who acquire and those who create. From that could arise a felicitous world civilisation.”

30 other products in the same category:

Swatch THE LADY & THE MIRROR by Mira Fukuda special